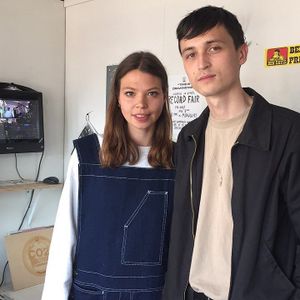 I started writing this piece in January, got distracted, but felt it worth finishing, to share the discovery of a fine Australian duo; Kllo, made up of musicians Chloe Kaul and Simon Lam.

They released their second album ‘Backwater’ late last year and it has some tracks which have resonated with me to a really quite pronounced degree.  It’s rare in my experience to find tracks with an R&B inflection / mode that I can listen to again and again even though I am somewhat drawn to the kinds of feeling that the best soul(-ised) music seems to generate.  In that regard, finding something that can be listened to repeatedly with little drop in intensity is an energetic joy.  Especially if it can engage the body with dance (like Dissolve does for me).

There are some tracks which don’t quite escape genre convention (although there is a good spread of  broad electronic moves on here) with something like ‘Last Yearn’ seeming to lack intensity to cut through a dynamic too wound up with an overly hyper-melodic tendency of much mainstream R&B.  Then again, its rare for albums to stand out in each and every track and the quality here when it hits is vibrant.

Something I was aware of in terms of taking these songs on was the sense of some kind of immediacy (this is pop right?) but I felt like I was aware almost for the first time just how unconscious the moment of loving something is, loving a song – it was like I’d spotted traces of the first song (Downfall) as it passed the border into my consciousness, but that its acceptance was almost impersonal, or proceeding in a way prior to my understanding of how ‘I’ form that acceptance.  In this respect, I was reminded of the paper given by Tim Sayer at the Cybersonica event I’ve referenced before.  There was a section of Tim’s paper which examined research from scans of the human brain registering specific activity towards a chosen action, but incredibly discovered that the brain ‘lit up’ in the direction of the act before any conception or will towards it had apparently become known to the person themselves.

This made me think about reflexivity in listening.  About how much a tuning process is taking place in the actual listening, With the songs here by Kllo which really feel like they take off, it felt like an almost simultaneous acceptance, exempt from usual structures of study or agreement in the process of listening.

But then again, this might be because as you dig into the sound a little, certain things become apparent in what Kllo are drawing upon, as the sonic, melodic material of their work (more of which shortly).

Dissolve is a reflection of the near end of a relationship, but has such a bright and clean vibrancy, when the chorus arrives, kicking in with its sudden double speed refrain ‘there i go-there i go’ immediately energising the change.  Its also driven with the simplicity and space of its main keyboard riff, repeated over and over – a three chord rise, mainly with a drop at the end, but when we first hear it, its given as a pure rise with no drop, a kind of phantom statement that runs through the rest of the iteration.  Its also savvy as an electronic sound, partly fluted, partly glassy.  Chloe Kaul also has a wonderful knack of not oversinging, so there is the overall effect of a confidence, both in the simplicity of the music (electronic, vocal) and its delivery.

Nylon is simply beautiful as a piano/keys ballad.  It brings to mind somewhat another beautiful song, Twice by Little Dragon.  Maybe its the bubbling synth line running through the piano, though with Twice a crystalline presence comes through the static refrain of the piano, and while carrying a similar pathos, Nylon (haunted by filtered backing vocals that could come straight out of Burial) keeps a kind of warmth which it burnishes with its beautiful main chord change.

There is a pervading ennui to this kind of drenching feeling, which for all its beauty must be understood, but it does identify with these words that importance of our capacity to be lost (but to survive this – Kaul is also singing ‘I don’t want to die young’) the feeling of a love-dissolution, the need to return is also the affirmation of being lost, of being outside what is normal, habitual and understood.

In that respect Nylon is like the backdoor, through which we hear someone returning, but through which we are also reminded of the way out, of the need to find and maintain the love and the being lost with it.

It took a while to really find the eponymous title track on the album (Backwater).  A short synth duet composed of two refrains, one broadly rising, one broadly falling and yet together and in those spaces, forming something genuinely poised and immersive.  As an engine, it becomes clearer again that kllo are utilising Burial and BOC to some extent (the aforementioned material being drawn upon), but this isn’t in a slavish or derivative way, and not in any way that isn’t sufficiently its own new form.  Instead they can become more clearly understood to be ‘abstract machines’ in the Deleuze sense of a specific, nameable mode of action, engagement, thought – which brings specificity of feeling/affect and approach.  In this case for example, the Burial abstract machine of the voice as a transformed, wordless expressive fabric of becomings – be they female, animal or ethereal.  Redolent of a widened space of activity between humans and other material (materialing abstractions) with specific flows, rhythms, means and realisations and which when taken up in a new form – extend the specificity and mode of the abstract machine.

The track Backwater brings to mind a sense of the light in new wave american indie cinema (something I was trying to get at with the end of the piece on Celine Sciamma’s Water lillies), or the best soundtrack moments of spaces.

The thing with being unreflexive is that sometimes, it can take time to understand what has really occured when you have been listening, or what you have really been listening to.  Fully realising the call of undercurrent, as with the track Backwater, where there is the affective force of a prime Burial through the haunt-processed vocals and Boards of Canada’s delicate, crystal liquid synth lines.  Is Kaul singing ‘everything’s opening now?’ or maybe ‘everything’s over now?’ It hardly seems to matter, there is a pathos of incredibly tinged spatiality, caught among the counterpointed water-expressive refrains.

Its also interesting that they’ve gone for ‘Backwater’ as such a naming arrow to their work.  The idea of being stuck in a stagnant, congealing space.  There is the idea that human beings have become somehow compromised in a sedate acceptance of the formation of life and the world (and of human life and the human world) a trajectory interrupted somehow, now banished to isolated and cut off space of defined awareness and conceptual limitation.  Essentially trapped within abstract, systemic, low energy vortices of reified conceptual stagnancy.  Capitalism, elitism, reason-control, the very ends of understanding in the form of surface level categorical realism that has its depths, but depths that are limited to re-inforcing variant limitations of concepts and conceptualism.  The bars of a prison whose encampment is life-blindness and an inbred unknown toxicity to the idea of love and freedom as the outside through which humans need to strive, bound down by endless reactivity in the name of self importance and standing and socialised self-identification and station.

‘Downfall, it defines you… Downfall… Not all for nothing…’

Ever ask why good music is important?  Because it represents the spaces which are taking us outside these boundaries of self-confinement and the staleness of endless mental reactivity, the language of the imagined slight against me, the judgement world of where I stand, if I am liked, whether in the broadest of nonsensical realisations, the binary applies of favoured, not favoured.  These are like the stakes with which we are tied, to untie requires focusing of intent and a mobilisation of concepts of freedom and understanding which (also happen to) unearth the form and mode of these constraints and begin the plane of trajection which is to move (and root) beyond these ties and their arrival (ongoing production), their form, to embrace the wildness of what is outside them and to find that slender modicum of opening which is the wider intent of the compass towards connecting as love, a warrior attainment mode of being.